Murder! The fold is dead due to a single gesture.

‘Above The Fold’ is Six Feet Under

The term ‘above the fold‘ originated from the newspaper business, as a reference to the information that was visible when the bundle was folded and stacked in the racks.

You see, back then designers were limited to a certain pixel width and height, so the concept of ‘the fold’ made a lot of sense. Marketers strived to put the most important information in that space. (In fact, some sites only used that space for the entire website!)

But it’s 2018. We need to stop referring to ‘above the fold’ because it no longer exists. It died when a new technology was introduced in 2007.

This technology changed everything about the infrastructure of the internet…Can you guess the culprit? 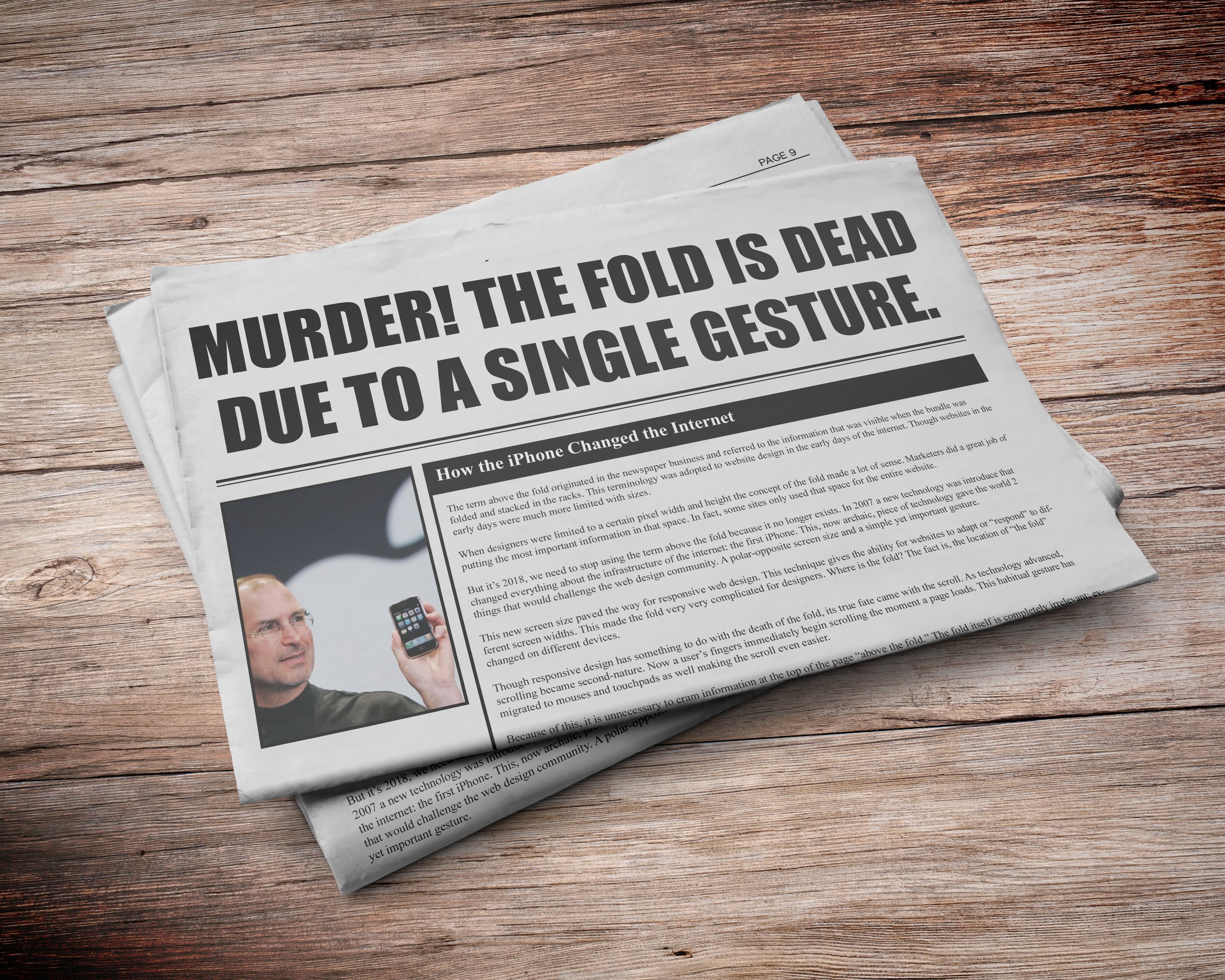 The iPhone was born in 2007 and changed everything we thought we knew about website design. This now archaic piece of technology gave the world two things that challenged everything we knew in the web design community:

The iPhone’s new screen size paved the way for responsive web design, which gives the ability for websites to adapt or “respond” to different screen widths.

This made ‘the fold’ very, very complicated for designers. Where is ‘the fold’? The new reality was that the location of our ‘fold’ changed on different devices, as you can see below.

Evidence: The Gesture to Scroll

Though responsive design has something to do with the death of ‘the fold’, its true fate came with the scroll.

As technology advanced, scrolling became second-nature. Now a user’s fingers immediately begin scrolling the moment a page loads. This habitual gesture has migrated to mouses and touch pads, too in order to make the scroll even easier.

SO it is unnecessary to cram information at the top of the page ‘above the fold’. The fold itself is completely irrelevant, because everyone inherently knows there is more information below–there’s always more!

So where does this leave us? The Verdict

This new information gives us the ability to organize information in a concise and intriguing way. Rather than trying to stuff the top of a site with a ton of information, we can now organize the content by importance and even tell a story with the space.

It also paves the way for new, more appropriate terminology.

Marketers have and should start to call the top section of a page ‘highly visible’ instead of referencing ‘the fold’ (RIP).

This terminology still refers to the top section of a website, but more importantly changes the conversation from ‘where does my information cut off?‘ to ‘what is the key piece of information that will make the user scroll?’.

So stop worrying so much about where the information gets cut off and worry more about how to keep the user yearning for more.

If you’re still not sold that a user will scroll, explain why you thought to scroll through this article…I rest my point.