Part 1: A Look into Brands with a Superior Twitter Strategy

In this day and age social media rules all, especially when it comes to businesses and corporations of any size. Your presence (or lack of presence) on various social media platforms like Facebook, Twitter, and Snapchat determine your success in real life.

It is now no longer enough for your business to have a great real-life presence. You must have just as good of a presence in the online world. We have seen the rise and fall of many companies due to their social media strategy.

Each platform is used for very different purposes by consumers. It is important that businesses are able to differentiate this in order to better address their consumers and create an effective social media strategy.

This blog series will take you through one social media platform at a time and show you how each channel can impact your business for better or for worse…Starting with Twitter. 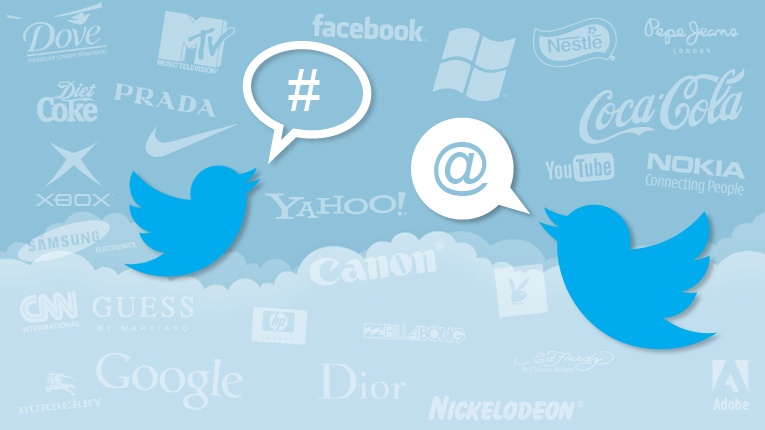 Twitter has 330 million monthly active users and of those users, 261 million are located outside of the United States. People love to tweet and there are an estimated 500 million tweets per day. So it makes sense that Twitter is a prime place for businesses to engage and interact with customers.

Twitter is often used by customers to address questions, concerns, and general feedback to companies quickly. Thus, it is in a company’s best interest to respond in a timely and effective manner, which is much easier said than done.

Let’s look at some great examples of companies with exceptional Twitter accounts.

Dominos is known for their effective Twitter strategy, especially when it comes to customer complaints. They are very responsive even when their customers may not always be right (as you can see in this example). 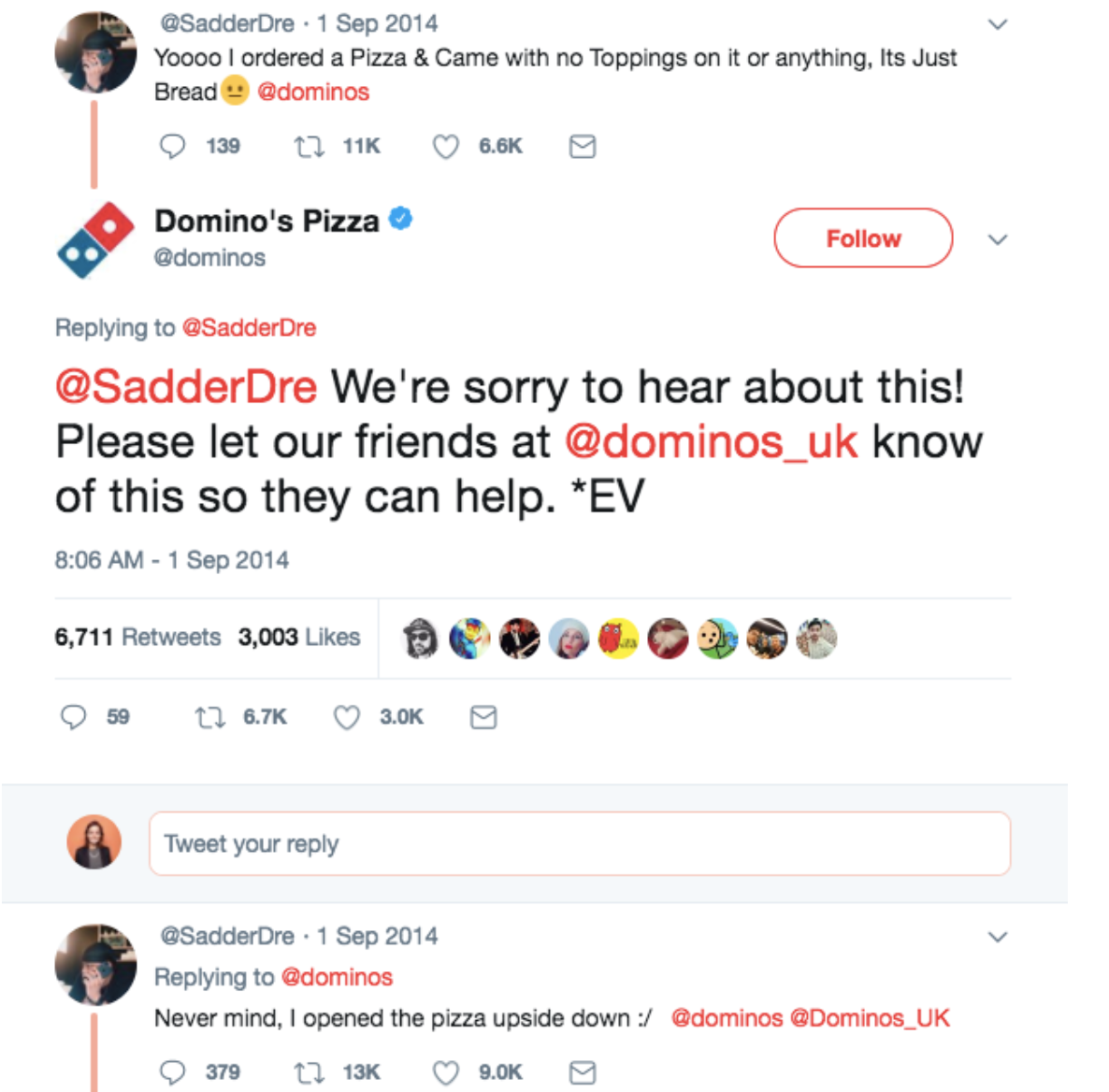 They use each customer’s tweet as an opportunity to advertise their customer service and care for their customers. Just by responding to the tweet they generated thousands of impressions which could turn into business for them in the future.

In fact, Dominos drives tons of business through Twitter with their tweet-to-order campaign, which began in 2015. Customers now have the ability to tweet the “?” emoji and have a pizza delivered. Dominos is the only company currently using this strategy and it seems to have paid off. Dominos is recognized as the world leader in pizza delivery and digital ordering technology, according to Cision.

Twitter also provides companies with a perfect channel to communicate with their audience especially after a crisis occurs. In fact, that is often the first place customers will go, to see a company’s response if they are under fire. 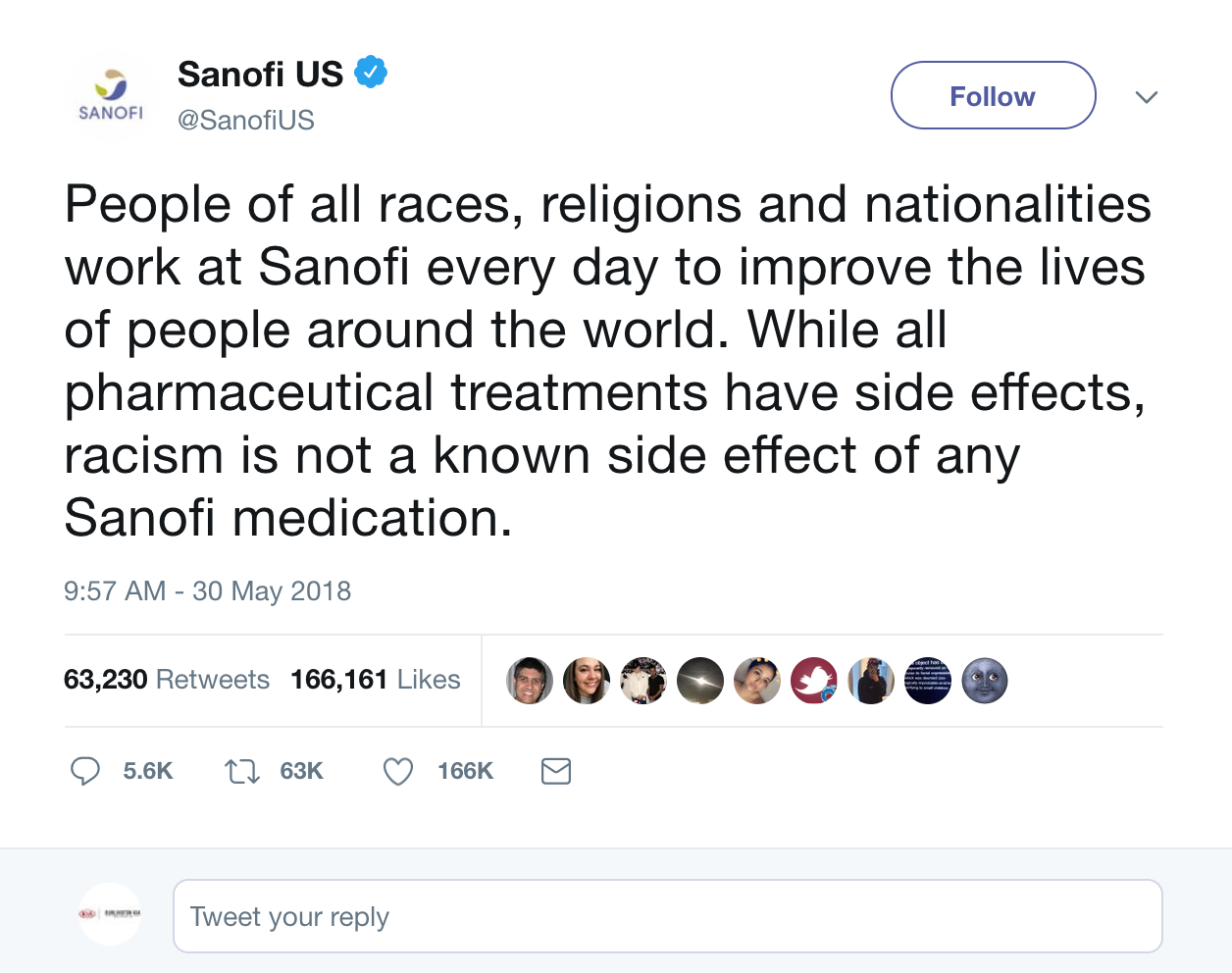 A recent example of this was after the infamous cancellation of the “Roseanne” reboot. Actress, Roseanne Barr took to the media to blame her Ambien prescription for her outlandish and racist tweets.

Sanofi (the makers of Ambien) immediately jumped on Twitter to prevent this remark from impacting their business in a negative light.

Sanofi could not have used Twitter in a more beneficial way. They were able to address the problem, show their stance, and even provide a witty comment that went viral.

The tweet made its way all over Facebook, LinkedIn and even onto the homepage of CNN and The Washington Post. It’s safe to say the next time people think about Ambien or Roseanne they will most likely remember this tweet putting Sanofi at customer’s top of mind.

The best part? This advertising cost the company $0 marketing dollars and the message reached millions. That is the power Twitter can have on a business.

One way companies are sparking follower engagement is by using video in their tweets.

The use of video on Twitter has become one of the top ways for marketers to engage their customers. Twitter Video views on the platform have grown 220 times compared to the last 12 months. Tweets with videos are much more likely to be engaged with than tweets with photos (6x) or gifs (3x).

Video ads on Twitter are also seen as being less intrusive by consumers.

According to a survey by IPG Mediabrands in partnership with Twitter, 67 percent of Twitter users found that video ads that were promoted in the first view were not intrusive. “First view” is the term given to the first promoted ad shown in the Twitter feed. The percent increased to 73 percent when ads were moved farther down the timeline, these ads are called “Standard View”.

Customers also noted that they enjoyed the videos and thought they were informative, helping them make purchasing decisions, like buying a car. In fact, 25 percent of new car buyers use Twitter in their decision-making process according to a Nielsen study.

Nike uses video throughout their Twitter strategy to engage millions of consumers. In a recent ad, Nike launched their new campaign #UntilWeAllWin. In the 30 second ad, tennis superstar, Serena Williams depicts her fight to be seen as equal, as a female athlete.

The video has since gotten almost 4 million views, over 6,000 retweets, more than 300 comments and just about 20,000 likes. The video has clearly made a lasting impression on millions and will continue to do so as it circulates through the online world. All Nike had to do was post the video once on Twitter and they were able to create an advertising gold mine.

.@SerenaWilliams has proven time and time again, there’s no wrong way to be a woman. #UntilWeAllWin pic.twitter.com/aAMZv9IjCW

These are just some examples of the ways different brands are using Twitter to generate positive results. Twitter just like any tool can do great things for your business but it is important to create a clear plan to best monopolize your Twitter account. If you go into Twitter blindly you can really hurt your business by not effectively communicating with customers. So it is important to create a social media strategy.

In order to have a superior Twitter strategy like Nike or Dominos, you need to have a foundation and understanding of social media best practices.

Check out and download our Social Media Handbook for a brief on the fundamentals of social media.